Could Buy Now Pay Later For Business Be The Next Boom?

BizPay's CEO David Price sat down with Sean Aylmer from the Fear & Greed podcast to discuss the rise in the Buy Now Pay Later space and how BizPay is doing it differently!

"Buy Now, Pay Later is becoming more and more saturated, with Afterpay, Zip Co, Klarna, Affirm, PayPal and a whole bunch of others competing in the consumer space. To stand out, fintech's need to establish a point of difference.
And that's exactly what David Price did in launching BizPay, a business to business Buy Now, Pay Later offering. The BizPay founder and CEO explains all."

Here's what David and Sean discussed on the podcast...

We consider the B2B buy now pay later market to be a completely separate market segment. So, you have the huge business-to-consumer segment of the market, which is over $10 trillion. And then there's this whole other side of the world's global economy, where there is actually over $50 trillion of business invoicing being processed globally per year.

Small to medium businesses all have a huge amount of cash flow volatility and surveys consistently every year put it in the top three existential concerns for a business. So, cash flow is really in the way of businesses just getting into their normal flow of doing business. They're waiting for customers that are late to pay them. In Australia, the average 30-day invoice is paid in 36 days. We can solve your cash flow volatility with a very short-tenured product.

The average transaction size for the B2B market is about $ 17,000. On the B2C side, it's $160. Our average transaction size is over a hundred times larger than the B2C market so we build up transaction volume much faster than B2C. When we acquire a customer, they're also using us more times per month than on the B2C side. We see our customers using us multiple times a month, so we get on average, more than 30 transactions per year in the first year with a new customer, versus on B2C, you see on average eight to 12 in the first year. So, the transaction volume being built up in the B2B market is so much more sizeable per customer than what you see on the B2C side.

COVID has really supercharged buy now pay later, both on the B2C side and the B2B side, people have had more cash flow constraints that need alleviating. BizPay's goal is to support the community in getting back to business. And when you're coming out of lockdown, what we found with many businesses is they haven't been operating, they need to restock and resupply their entire business, there are big upfront costs. So, that's perfect timing where you have all these big lumpy expenses upfront, but you don't have your revenue yet. BizPay alleviates that for you. So, you can stock up and then have those four months to pay it off. And over those four months, all your revenue comes back because you're getting back to business.

Want to listen to the full podcast? Check it out here:

BizPay is a seamless technology platform that solves cash flow challenges associated with paying business invoices. The company was founded to help businesses grow better by enabling them to use top suppliers and professional service providers. Frictionless, transparent and affordable, innovative payment products allow businesses: to split bills into 4 easy instalments and/or receive full invoice payment in 24 hours to grow their businesses without being constrained by cash flow. 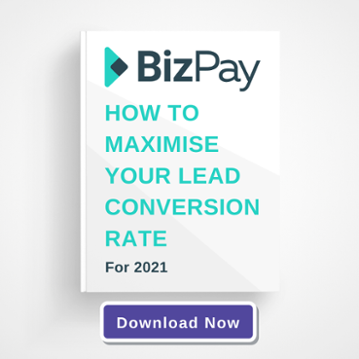