For most large corporations and government departments, hiring teams of contractors through a specialist contract labour hire firm (rather than recruiting permanent staff to meet short term needs) has become the “go to” option.

Why? Because the contract labour option is fast, scalable, hassle free, and perfectly suited to meeting the short term employment needs created by all manner of large scale projects, including, but not limited to:

Consequently, the number of specialist contract labour hire firms has exploded over recent years, and this sector now represents one of the largest and most buoyant parts of the recruitment industry.

What makes this sector so different from the others is the inherent growth cap, which all operators eventually encounter when they reach their internal funding capacity. Thanks to this growth ceiling, new market entrants can enter the domain and win market share relatively easily.

To illustrate, the contract labour hire provider pays their workers weekly or fortnightly, bills the client at the end of the period, and relies on short term funding to cover up to 80% of the invoice value for 30, 60 or 90 days (until the invoice is paid). Eventually, the 20% of total invoice value, which they are self-funding maxes out, and the firm has reached its growth cap.

To enable the firm to fund their wages bill, they typically use a factoring company (or similar), who advance them 80% of invoice value, and remit the balance (less service fees and interest) when the client pays after 30 days.

In this example, what this means is that, instead of being $3 million out of pocket at the end of the month when the client pays their first invoice, the contract labour hire company is $600,000 out of pocket (as the factoring company has advanced them $2.4 million - or 80% of the $3 million).

Assuming the company has internal funding capacity of $1 million, what this really means is that they might be able to take on two projects of this magnitude (at a squeeze), and then they are out of juice.

To the rescue is BizPay, shaking up the Contract Labour Hire industry in Australia by eliminating the funding cap.

By providing Contract Labour Hire companies with easy low-doc access to 100% invoice finance (less an upfront fee of 0.9 -2% of invoice value), BizPay is enabling companies that were previously constrained by the availability of funding for 80% of invoice value to grow by 667% before they reach their internal funding constraint. WOW!!!

A detailed analysis of the funding options available to Contract Labour Hire firms follows below.

Watch this space for an analysis of the disruption BizPay will cause over the next 24 months.

BizPay is a seamless technology platform that solves cash flow challenges associated with paying business invoices. The company was founded to help businesses grow better by enabling them to use top suppliers and professional service providers. Frictionless, transparent and affordable, innovative payment products allow businesses: to split bills into 4 easy instalments and/or receive full invoice payment in 24 hours to grow their businesses without being constrained by cash flow. 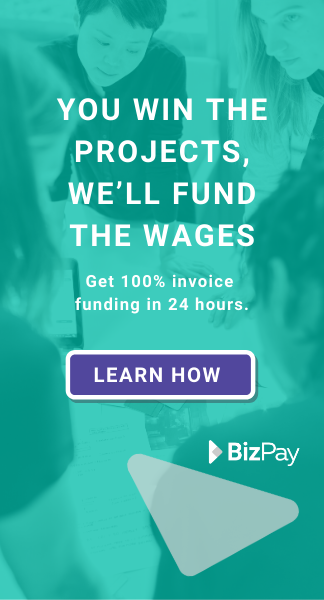